I went to Little Nan’s Bar in Deptford the other Saturday for a friend’s birthday party. Deptford isn’t really a place I’ve been to that much but it’s just down the road from me. I think I’ve been missing out on a hidden treasure. For those who don’t know, Deptford is south east London, sort of sandwiched between New Cross and Greenwich.

I went along to Little Nan’s Bar on Saturday at midday. We had booked a “Boozy Brunch” and our slot was from 12-2pm. It’s £35 per person and you get cheesy chips, (fake) fish finger sandwiches, sausage rolls and chocolates and sweets, as well as beer, prosecco and cocktails. I actually chose the alcohol-free brunch as I don’t like drinking so early in the day and don’t really do “all you can drink”, but I felt you would need a little more food if you were going full on with the alcohol.

Because there were quite a few of us, we actually had the party in Grandad’s Shed. It’s right next to Little Nan’s Bar and it’s a great little party venue. There was a sound system so old school classics were playing (think Spice Girls). There were heaters and plenty of kitsch decorations. It’s pretty quirky. Think framed photos of Pat Butcher (if you know, you know), wigs and sombreros for people to wear. Sorry some of the pictures are a touch out of focus, the lighting was quite orange and it was quite dark to add to the atmosphere I guess. But they weren’t the easiest photography conditions!

Overall, it was a really fun venue for a party. I’m not sure I’d make it my regular as it’s not a place you go to have a quiet drink, but if you have a large group of friends and want somewhere to have a party, I’d definitely recommend it.

Little Nan’s in Deptford is right by Deptford High Street train station and just off Deptford Market Yard. It’s open from 5-11pm Monday – Thursday, 3pm – midnight on Friday, 12pm – midnight on Saturday and 12pm – 10pm on Sunday. It’s so easy to find and if you want to continue the party there are a few craft beer places in the yard too.

Do you have anything like this where you live? 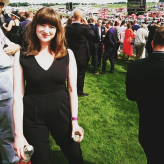 I’ve had the NARS Velvet Matte Lip Pencil in Bahama…

The Ordinary Hyaluronic Acid 2% + B5 Review

I picked up some skincare bits from The Ordinary last…

I bought the Clinique Chubby Stick in Two Ton Tomato…

Hello! Sorry I’ve not been as active on the blog…

Any cookies that may not be particularly necessary for the website to function and is used specifically to collect user personal data via analytics, ads, other embedded contents are termed as non-necessary cookies. It is mandatory to procure user consent prior to running these cookies on your website.